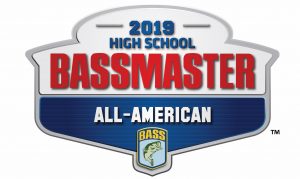 2019 NOMINATIONS DEADLINE WAS FEB. 8TH – THE DEADLINE HAS PAST.
BIRMINGHAM, Ala. — B.A.S.S. is seeking nominations for the best and brightest high school bass anglers in the country.

The Bassmaster High School All-American Fishing Team recognizes the 12 most outstanding high school anglers in the nation. The program is designed to reward young athletes for their performance in tournaments, leadership in their communities and involvement in conservation efforts.

Applications for the team, which is now in its fifth year, will be accepted today through Feb. 8.

To be considered, a student must be nominated by a parent, coach, teacher or other school official. Students currently enrolled in grades 10 through 12 with a current grade point average of 2.5 or higher are eligible.

Judges will select up to two student anglers in each state. These All-State Fishing Team members will become semifinalists in the selection of the 12-member All-American Team. Criteria include success in high school fishing tournaments and involvement in conservation efforts and other community service activities.

The anglers chosen will compete in a one-day Bassmaster High School All-American fishing event to be held in conjunction with the 2019 Toyota Bassmaster Texas Fest benefiting Texas Parks and Wildlife Department — one of nine regular-season Bassmaster Elite Series tournaments being held this year. Elite Series anglers will serve as “coaches” for the student anglers in the one-day fishing event near Emory, Texas. The high school standouts and Elite Series coaches will be honored before the weigh-in crowd.

“The applicants for our High School All-American program continue to amaze me with their dedication to the sport, as well as academic excellence and community involvement,” said Hank Weldon, senior manager of the Bassmaster High School program. “We’re very proud to offer a platform that recognizes successful student athletes on their many accomplishments, and we can’t wait to see what this 2019 class of anglers has in store.”

All students who compete in high school fishing events are eligible, regardless of whether they are affiliated with B.A.S.S. or another fishing organization.

Notices have been sent to youth fishing directors of the B.A.S.S. Nation and other organizations, as well as leaders of state high school fishing programs. Adults can nominate students by filling out an online form at Bassmaster.com/allamerican. Nominations must be submitted before midnight on Feb. 8.

About B.A.S.S.
B.A.S.S. is the worldwide authority on bass fishing and keeper of the culture of the sport. With more than 510,000 members internationally, B.A.S.S. is not only home to the nation’s premier fishing tournament trails, but it also boasts the most expansive and comprehensive media network in the fishing industry. Its media include The Bassmasters on the ESPN networks, more than 130 hours of tournament programming on the Pursuit Channel, 250 hours of on-the-water streaming coverage on Bassmaster LIVE and 1 million monthly visitors to the flagship website on bass fishing – Bassmaster.com. B.A.S.S. also provides more than 4.4 million readers with the best in bass fishing coverage through Bassmaster and B.A.S.S. Times, and its radio and social media programs and events reach hundreds of thousands each month.