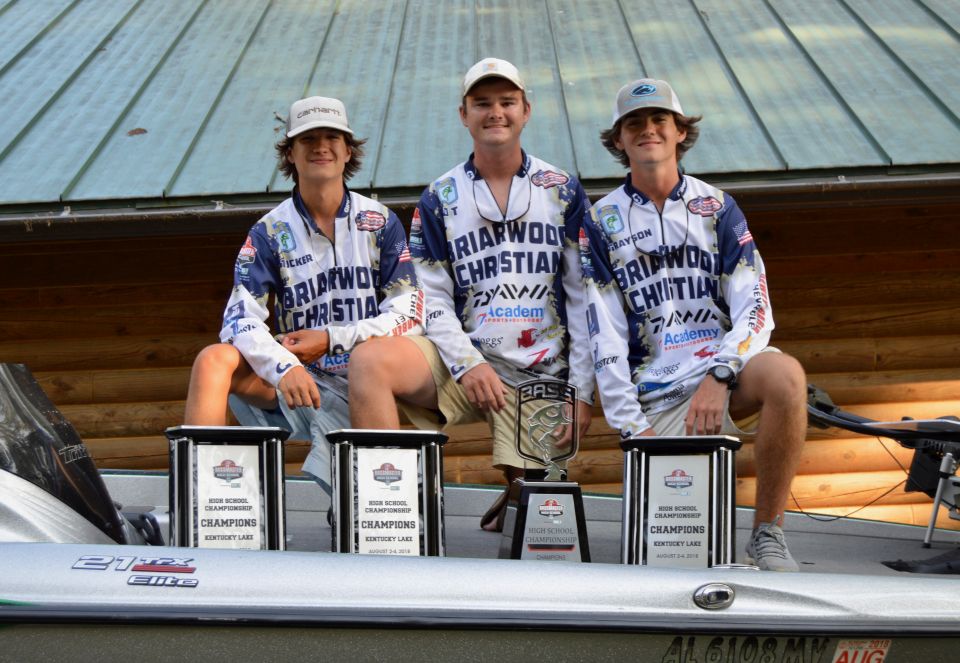 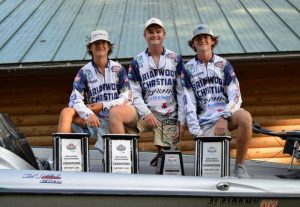 The frustration of fishing filters down to even the youngest of tournament competitors.

The emotion set in for Tucker Smith and Grayson Morris, a team from Birmingham’s Briarwood Christian and regular competitors in Alabama B.A.S.S. Nation high school tournaments, in the final round of the Mossy Oak Fishing Bassmaster High School Championship presented by Dick’s Sporting Goods.

The goal was within sight. Smith and Morris knew that winning the title on Kentucky Lake in early August was an achievable proposition as they entered Day 3, the final round of competition. One significant problem stood in their way: the fish were simply not cooperating.
“The morning was discouraging,” Morris said. “We thought our opportunities were closing down. We were a little frustrated and upset.”
About three hours into the final round, the duo from Briarwood Christian experienced those feelings because their early-morning topwater bite, which had produced quality keepers in the first 2 days, failed to produce even a single fish.

The bass were still there. They simply wouldn’t stay hooked up.

Sitting in third place after two days of competition, Smith and Morris had moved up the leaderboard from their fifth-place standing after Day 1. They positioned themselves not far behind the tournament leaders on Day 2 and felt an extra excitement going into the final round.
“We were pumped up,” Smith said. “We thought, ‘man, it’s going to happen.’ We were down to the final 12 teams. They let us go at 5:45. We were expecting a great topwater bite. But …”With no fish in the livewell, the Briarwood team even considered abandoning their plan from the first 2 days. Then the frustration turned golden; a magic moment on the water materialized.

They ran into a creek – Smith actually called it a canal – behind the shallow flat that had previously produced the topwater fish. The move quickly erased their frustrations. 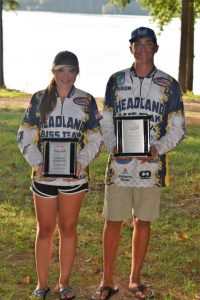 Over the next few minutes, the feelings associated with an empty livewell turned into elation as they milked one key area for a limit of bass weighing 18-9 that vaulted them to the tournament championship. Their three-day total of 50-2 was almost 10 pounds better than second-place competitors Aaron Cherry and Gracie Herbold, another Alabama team from Headland High School that also steadily climbed to the top of the standings.

About halfway into the canal, an area of cold water proved to be a bass magnet on Day 3. Smith and Morris called the tiny spot of bubbling water various things – a spring, an overflow, and a run-off – but didn’t know the exact source of the moving water. They had caught fish there in practice and in the first 2 days of competition. Nothing, however, prepared them for their final-day haul.
“On that third day, there was just something about it,” Morris said. “We caught four right off the bat, and pretty soon we had a limit. That was a magical thing that happened on Day 3.”

Smith caught three consecutive keepers on a bladed jig. When Morris hooked up with a 5-pounder on a jig, their frustrated feelings were over. The title was totally secured when they culled with another big fish in the final minutes.
Despite the tough start to their final round, Smith and Morris drew on other frustrating moments from their tournament year and knew to “just keep fishing.”

“They have been really consistent all year,” said Briarwood coach, assistant principal and director of athletics Jay Mathews. “It’s kind of funny if I remember correctly. After our Neely Henry tournament when they had really struggled, I told them, ‘Fishing can be humbling. Keep your head down and keep fishing.

“To their credit, they fish hard regardless of the situation or where they are. They have learned that type of effort in these (B.A.S.S. Nation) high school tournaments, which have created a healthy environment for competition.” 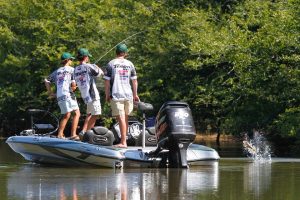 Briarwood lands a keeper fish in the final round. (Photo courtesy of Jay Mathew)

The final-day flurry ended a steady rise to the top by the Briarwood team, which was captained by former Briarwood and current University of Montevallo angler J.T. Russell. They started off the tournament with a 16-10 bag, catching fish on a swimming frog early and filling their limit later in the canal. They bumped up to third place on the second day with a similar approach, boating 14-9.
Because of the consistency of the first two days, Smith and Morris knew that the fish were still around despite their early fish-less stretch.
“We weren’t beat even after about three hours of fishing,” said Morris, who thanked Hammer Rods, Shimano, and Mark’s Outdoors for their support of the Briarwood fishing team throughout the year. “We knew that we could catch fish. We just didn’t have any idea we would be able to catch that big of a limit.” 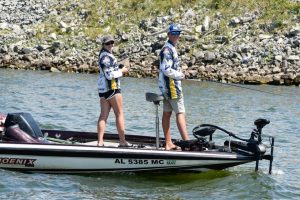 Cherry and Herbold, the team from Headland, had similar thoughts throughout the week. They overcame boat problems on Day 1, fished until the last possible moment and barely made their check-in time. Their total of 15-9, bolstered by some last-minute quality bass, put them in 7th place.

Headland, captained by Gracie’s father, Hank Herbold, moved to 5th with a 13-1 limit on Day 2, setting up another late surge in the final round. “We didn’t have much early on the final day, but we knew it was tough because most of the other teams weren’t catching them either,” Cherry said. “We knew it could still happen.” The Headland team never filled their limit in the final round, but their 4 fish still weighed 12-0, not enough to catch Briarwood but enough to overtake the previous day’s tournament leaders.
“It was stressful to say the least,” Herbold said. “We were all praying hard. I had caught one fish pre-fishing, so I was unsettled, (but) I managed to catch 3 of our fish each day.
“Heading into weigh-in, I had a good feeling. We knew we could finish in the top 5, but I knew we couldn’t win from reading the B.A.S.S. blog. Second place was crazy to win and was not expected.”
The Bassmaster High School Championship culminated another successful year for Alabama B.A.S.S. Nation (ABN) high school teams, who fished a series of tournaments across the state starting in the fall of last year. Smith said the regular grind of those events helped Briarwood prepare for the championship.
“The competition is really tough,” he said. “It’s not just like we’re going fishing by ourselves. Those kids are some sticks. It was not just luck even though we won by about 10 pounds. It was a good challenge that we were well prepared for.”
Both of the top teams earned scholarship money for their work on Kentucky Lake although none of the anglers from Briarwood or Headland has settled on a college destination yet. Morris just started his senior year of high school and Smith, Cherry, and Herbold are all juniors. B.A.S.S. contributed to the scholarship funds, but the bulk of the money came from Bethel College, a collegiate fishing powerhouse in McKenzie, Tenn. Bethel divided almost $100,000 among the top 12 teams.
“It would be awesome to fish in college and work in the fishing industry,” Herbold said.
The ABN high school tournament season starts again in the coming months. Check the organization’s website (www.albassnation.org) soon for the 2018-19 schedule. Despite the few moments of frustration, the Briarwood and Headland team all voiced their excitement about the prospects for the coming year and hopes of returning to the championship.
“We plan to grow stronger and hopefully remain competitive,” Herbold said about her teamwork with Cherry.
________________________________________
Greg McCain is a freelance writer with current credits in Alabama Outdoor News, Great Days Outdoors, Alabama Game & Fish, and CrappieNOW online magazine in addition to producing content and photos for this website. He is a member of the Belgreen Bass Club, an ABN chapter near Russellville.