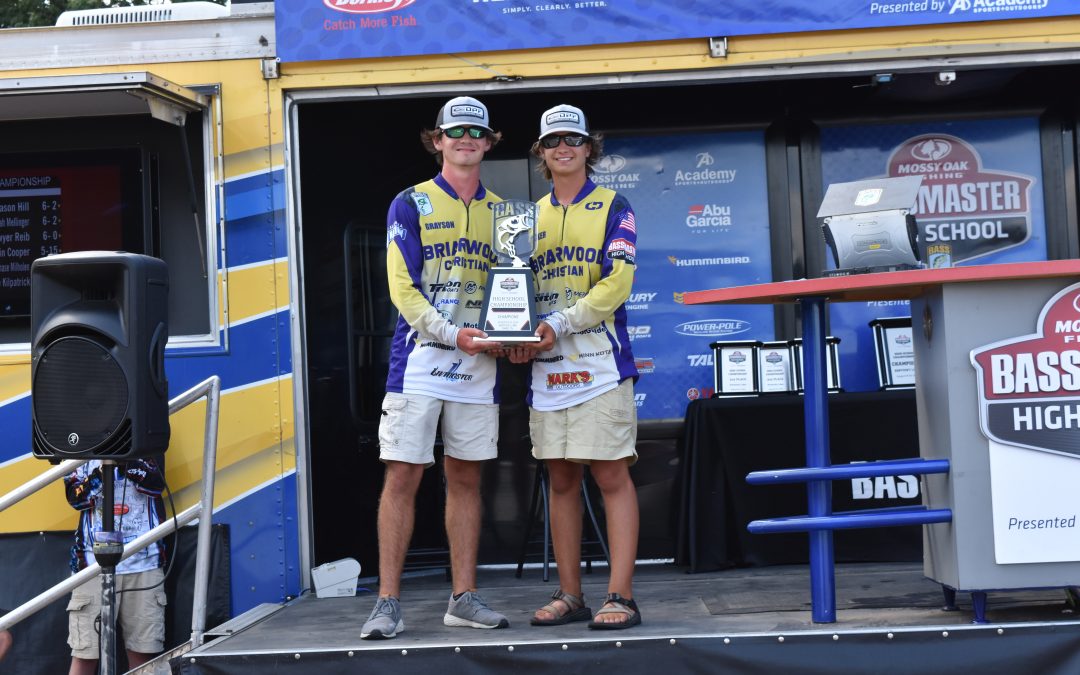 Winning a championship on a national stage is a rare occurrence, the pinnacle of bass-fishing success at the high school level.

Given the fleeting nature of high school careers and packed, highly competitive tournament fields, only the best anglers get to heft the trophy on the final day. Only select teams even get to compete for a title, much less earn the opportunity to repeat as champions.

“In fact, we were just talking about how unlikely it is to repeat,” said Briarwood fishing team sponsor Jay Mathews, also the athletic director for the Birmingham school. “It just doesn’t happen. The fish have to cooperate, and even to win it once is unreal and a great accomplishment. There are things out of your control that you just can’t help. To repeat is almost beyond comprehension.”

Added Smith, a member of the 2019 Bassmaster High School All-American Fishing Team, “To be honest, I didn’t know if we had a chance to go there and repeat. To get there and find out that we still had the chance was really eye-opening. We just kept grinding, made some good decisions, and caught some key fish. I was surprised when we came out of the gates with 19 lbs.”

Kick-started by a six-pounder in the tournament’s opening minutes and culminated by a late flurry on Day 3, Morris (age 18) and Smith (age 17) brought a 50-1 total to the scales. That winning weight included the big bag of the tournament, 19-11 on Day 1. They followed with a solid 17-11 limit on the second day of competition, giving them a lead of over four lbs. over a local team from nearby Henry County High School going into the final round.

While the overall totals looked good, each day proved to be a grind. They milked their shallow-water patterns, including catching a few fish in the magical creek that produced most of their fish in 2018.

Overall, the fishing was much more difficult this year. In fact, Briarwood only had a single fish in the boat at the mid-day break on Day 2. A key move to some current-influenced boat docks provided the late bites, including a five-lb. largemouth caught on a spinnerbait. Morris said the team caught the majority of their keepers on a bladed jig each day but needed their whole arsenal to fill out limits.

“We felt good with the four-lb. lead, but we also knew that anyone could catch a mega-bag on Kentucky Lake,” said Morris, who was an honorable mention member of the Bassmaster High School All-America team this year.

The final day proved gut-wrenching despite the lead. In the closing moments of competition, Morris and Smith still had only four fish in the livewell. They would not have beaten Henry County without two key late catches.

“On the final day, (Mathews) told us we were starting out with a 4½-pounder in the boat,” Morris said, “to just relax and fish. That we had that cushion and needed to catch five. But when we got down to the end and still only had four fish, it was tough.”

Added Smith, “It was super stressful. Each of the first two days, we had gotten five to seven bites. We didn’t get the bites on the last day.”

A final stop proved pivotal. The team returned to the boat docks close to where they had finished their limit the previous day. When they arrived, the current was gone but the fish were still there.

Morris pitched a jig to the structure around the dock, felt the bite immediately, and soon had a three-pounder, the day’s biggest bass, in hand. A few moments later, Smith caught another keeper that culled, and they took off on the 15-minute run back to the launch. They arrived with only about a minute to spare.

The late fish allowed them to drop 12-11 on the scales and edge back into the top spot.

“It was something magical,” Morris said. “I guess it was just meant to be, but we put a lot of hard work and effort into making it happen.”

The workman-like performance was typical of the team, Mathews said.

“Once the tournament starts, they put their heads down and just fish,” he said. “Once they do get into fish, they are skilled enough to take advantage of the situation. They don’t miss bites. Our motto has kind of been ‘put your head down and fish.’ That’s exactly what they had to do on Kentucky Lake.”

The three-day effort culminated another successful season not only for Morris and Smith but also for the whole Briarwood team. Mathews said the overall team won three regional tournaments and one state championship in the various circuits that they fish. In general, high school tournaments continue to flourish across the state.

“(Morris and Smith) weren’t always the top finishing team for us this year,” Mathews said. “They fished with a target on their backs most of the year. They handled that spotlight well.

“They are part of a trend that I see in Alabama. All the teams compete but also get to know each other well and support each other, even when they are competing against each other. There’s a very healthy sportsmanship that the students and teams demonstrate toward one another.”

While Russell downplayed his role in the consecutive titles – “I just drive the boat,” he said – his contributions didn’t go unnoticed.

“He was such a great help eliminating the stress of the week,” Smith said. “He makes us laugh on the boat. When we get down, he’ll tell a joke. He’ll spit one out and help us relax. He does so many different things that contribute to our success.”

Smith also thanked various sponsors that contribute to Briarwood’s success. Mark’s Outdoors in Birmingham is a long-time supporter of the team and high school fishing in general. Drake Performance Fishing is another sponsor as are Temple Fork Outfitters rods (for Smith) and Hammer rods (for Morris).

The thoughts of a three-peat for the same Briarwood team won’t be a possibility. Morris fishes his first college tournament this weekend as a member of the University of Montevallo Outdoor Scholars Program. He and Russell will compete as a team for Montevallo in various college events this year.

For Smith, the idea of winning a third straight national title is an intriguing thought. He will team with a young angler for competition this year at Briarwood, which has been coached by Curtis Gossett since July.

“A three-peat would be insane,” Smith said. “It can’t happen for Grayson because he’s off to college. But I’ve thought about it since I have one more year of high school. If we can make it happen, we’re going to try and make it happen.”

Greg McCain is a freelance outdoor writer with current credits in Alabama Outdoor News, Great Days Outdoors, Alabama Game & Fish, and CrappieNOW digital magazine in addition to producing content and photos for this website. He is a member of the Belgreen Bass Club, an Alabama B.A.S.S. Nation club near Russellville.