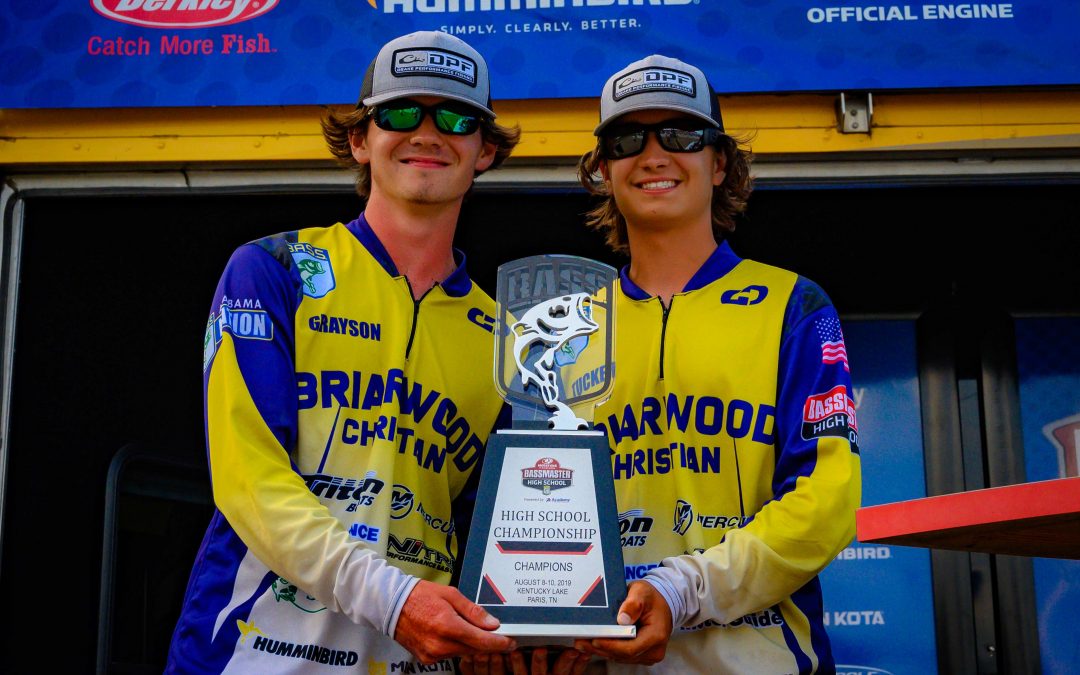 The duo, representing Briarwood Christian School of Birmingham, Ala., caught a three-day total of 15 bass that weighed 50 pounds, 1 ounce to earn a landmark win on Kentucky Lake here in the northwest corner of the Volunteer State.

The winners earned a $4,500 a scholarship, which will go toward their college education. Morris, 18, recently graduated from Briarwood and will compete for the University of Montevallo (Ala.) bass fishing team. Smith, 17, is a rising senior at Briarwood.

Morris and Smith staked an early lead in this year’s championship. Their limit of five bass on Thursday that weighed 19-11 was the heaviest of the tournament, and it gave them a lead of almost 2 pounds on the 300-boat field. They followed with an equally sound 17-11 limit on Friday which increased their margin to more than 4 pounds.

Morris and Smith came back to the pack on Saturday with a limit that weighed 12-11. Things could have been much worse for them, however, as they didn’t complete their limit until there was only 15 minutes of fishing time remaining. That followed the same anxiety-building pattern the duo faced all week, though late bites each day carried them to the championship.

“We had three fish at 10 o’clock today, which was better than the first three days,” Morris said. “So we thought we were making some progress. Tucker caught our fourth fish about an hour later, but then it just shut down completely.”

To catch their fifth keeper, Morris and Smith moved to an area with moving current. The change of scenery was key, and with only minutes to go, Morris caught the team’s fifth bass — a 3-pounder he boated with a 3/8-ounce jig (green pumpkin with a black/blue trailer). A moment later, Smith caught another bass that gave the team its only upgrade of the day.

“It wasn’t much of a cull, but it eased our nerves a little bit,” Smith said.

The Briarwood team certainly needed those final strikes, because Mercedes Ellis and Gage Sherrod of Tennessee’s Henry County High were ready to apply pressure at the scales. The locals caught the big bag on Saturday, a 15-4 limit, that left them a mere 1-12 out of first place in the final standings.

Morris and Smith spent most of the week fishing in the back of the same creek they mastered en route to the 2018 title. They threw dark-colored jigs and chatterbaits and caught their best bass in water as shallow as 2 feet. They worked the creek banks incessantly, trying to excite bites. There weren’t many of them this week, but Morris and Smith eventually found the right ones.

Kentucky Lake was difficult on anglers this week. Only four of the final 12 teams caught limits Saturday, and three of the 12 didn’t catch a weighable fish. On Friday, 129 duos failed to weigh a fish, and on Thursday, 97 teams zeroed.

While many teams struggled, Ellis and Sherrod used their knowledge of the lake to amass 48-5 over three days. They weighed the heaviest bags on both Friday and Saturday.

B.A.S.S. awarded nearly $24,000 in college scholarships to the Top 12 teams in the championship.  In addition, Bethel University offered more than $500,000 in total scholarship money to the top 24 anglers should they decide to fish at the school located in nearby McKenzie, Tenn.

Taj White and Ethan Ryan of the Arizona High School B.A.S.S. Nation won $875 in scholarship money for catching the Big Bass of the Tournament – a 6-14 largemouth they weighed Thursday.

Morris and Smith were awarded an additional $875 in scholarship funds for having the Big Bag of the Tournament. The money was originally awarded to Hunter Owens, a Natchitoches Central High School student (La.) who was part of the tandem that finished fourth in last year’s high school championship.

Owens was killed in a car accident earlier this year and B.A.S.S. wanted to award the unused scholarship to a deserving team. It was decided before the 2019 championship to present the money to the duo with the heaviest bag this week on Kentucky Lake.

Story and photo courtesy of https://www.bassmaster.com/news/briarwood-wins-back-back-high-school-championships